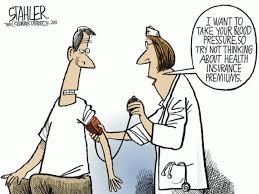 It’s a race against time! If we can’t control health insurance costs we’re going to end up with Medicare For All, and while that might help in some areas, it will probably be a mess. So let’s not go there!

To push back against ever-increasing health insurance premium costs, companies need to take the law into their own hands. By self-insuring, companies can reduce claims costs by taking control over their own plan document and trying some of the ideas advocated by the Health Rosetta crew.

You pretty much need to be self-funded to do these, but what do you do if you’re a small company? It’s risky. What if there’s a big claim lurking around the corner?

One workaround is to join a captive or consortium. You join a pool of other like-minded companies to team up and share the risk with.

If you live in the southeast, and you want to be part of the solution, drop me a line. I am working with a company that has found solutions to some of the common problems small groups face.

They have limited the size of renewals and they don’t laser at renewal. They are looking for someone to advocate for their plans in the southeast.